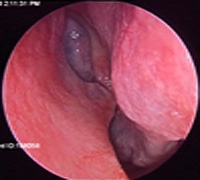 Dr. Jayman B. Raval,
Dept. of E.N.T. & Head-Neck Surgery,
S.S.G.Hospital,
Vadodara, India. 390007.
E-MAIL:  This email address is being protected from spambots. You need JavaScript enabled to view it.

Septoplasty is the surgical procedure for the correction of a deviated nasal septum.  It can be performed under local or general anesthesia using either a fiberoptic or a standard headlight.  It is a conservative surgery in which only the deviated part is removed leaving behind as much cartilage and bone as possible.  Endoscopic septoplasty is a minimally invasive technique that helps us to correct the deformity of the septum under excellent direct visualization using an endoscope.

Lanza, et al,1 and Stammberger2 initially described the application of the endoscopic technique for the correction of septal deformity in 1991. Lanza, et al,1 described a detailed endoscopic approach to the treatment of an isolated septal spur.
Endoscopic septoplasty is not only used for treating the symptomatic nasal obstruction but also for improving intra-operative surgical access to the middle meatus as an adjuvant to endoscopic dacryocystorhinostomy (DCR) and endoscopic sinus surgery.

Limited septoplasty3 is the repair of a specific and confined site of septal deviation directly opposite the surgical area for FESS namely middle turbinate, maxillary and ethmoid ostia. The instruments used in endoscopic septoplasty are similar to those used for conventional septoplasty as well as an endoscope.

The present study was carried out in the Department of ENT and Head & Neck Surgery, S.S.G. Hospital, Baroda from May 2007 to November 2009. The study included 22 cases each of Endoscopic septoplasty and conventional septoplasty.

All the patients in whom endoscopic septoplasty was performed as a preliminary step of another nasal surgery (ex.: FESS, DCR) were also included in this study.

At the first visit, the patient was subjected to a detailed clinical history including complete an ENT examination. The nose was examined with respect to any external deformity, discharge, septal spur, deviation of nasal septum, turbinate hypertrophy, polyp, or sinus tenderness. The patients were then subjected to routine investigations:  X-ray of paranasal sinus (water’s view) was advised to rule out sinus pathology.  Patients were taken for a telescopic examination of the nose, which was done under local anesthesia, on an outpatient basis. The patients who had a septal spur with other pathology like unilateral or bilateral polyps, previous history of surgery with recurrence of disease, chronic dacryocysititis, CFS rhinorrhea, or inverted papilloma were subjected to a CT scan of the perinasal-sinus (PNS).

All (22 patients) were subjected to endoscopic correction of the septal spur with some other endoscopic procedure.  Another 22 patients were subjected to conventional septoplasty under local or general anesthesia.  The intra-operative findings of two groups were compared. Postoperative pain, edema, bleeding and any other complications were compared in two groups.
All patients were followed regularly for a period of 3 months.  Postoperatively, persistence of complaints were assessed. Telescopic examination of the nose was done to look for correction of the deviated septum, recurrence of disease, crusting, healing, infection and adhesions between the septum and the lateral nasal wall.

The patient was kept in a supine position with the head elevated about 15 degrees. Atropine, Fortwin,and  phenergan were used as a premedication.  Nasal packing was done with ribbon gauze soaked in 2% xylocaine solution plus nasal decongestant drops. 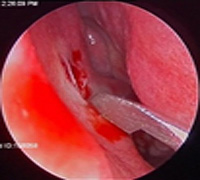 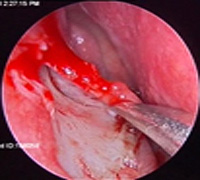 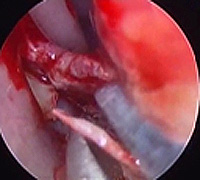 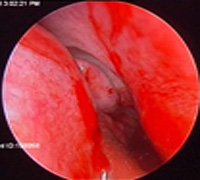 1. Proximal to the most deviated portion of the septum.
2. At the spur, inferiorly, in cases of isolated spur
3. Modified incision technique by Lanza, et al.

Mucoperichondrial and mucoperiosteal flaps are elevated with a Cottle’s elevator under direct vision with the help of a 0 degree telescope. The suction elevator can be a good substitute. The septal cartilage is then incised a few millimeters posterior to the mucosal incision. The deviated portion is removed with the help of an endoscopic scissor or forceps, taking care not to traumatize the opposite flap. The deviated portion of the vomer, or perpendicular plate of the ethmoid, is removed when necessary using a fine chisel.  Powered instruments can be used, although care must be taken not to traumatize the adjacent mucosal tissue.4 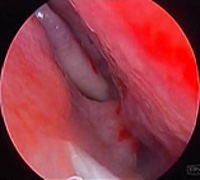 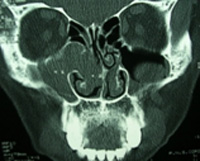 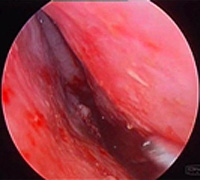 Nasal obstruction, nasal discharge, and headache were the main presenting symptoms.  On endoscopic examination, a septal spur was the main finding in the majority of patients in both groups.  One case had an irregular, papillomatous mass in the right nasal cavity suggestive of an inverted papilloma.  Two cases had an unilateral polyp suggestive of an antrochoanal polyp and two cases had bilateral, multiple nasal polyps suggestive of ethmoidal polyps.

Table 1. Indications for which Endoscopic septoplasty was done:

Indications, No. of cases, (percentage)

From analysis of the above data, the majority of Endoscopic septoplasties (50%) were done as an approach to other endoscopic surgeries.  A Computerized Tomography scan was always advised for the patients being planned for FESS and sometimes also in cases of minor septal deviations with suspected sinus pathology, and with a previous history of surgery with recurrence of disease. The majority of CT scans showed deviated septum/spur.  Concha bullosa was present in two patients. All the patients (100%) who underwent Endoscopic septoplasty had a septal spur. Seven patients (32%) had associated other nasal pathology.

Associated procedures, No. of cases, (Percentage)

In the majority of patients (45%), septoplasty was carried out with FESS.  In two of the patients, dacryocystorhinostomy (DCR) was performed and one had a CSF leak repaired through the intranasal route.  One case had endoscopic excision of an inverted papilloma.  In all four of these patients, septoplasty was required to provide space for instrumentation in the nasal cavity. All patients were assessed for intra-operative blood loss by measurement of blood in the suction at the end of surgery by deducting the amount of injection and saline used during surgery. The majority of patients (82%) who underwent Endoscopic septoplasty had minimal (<50 ml.) loss while 4 cases (18%) had  >50 ml. loss as compared to 10 cases (45%) in the conventional group.  A tear in the flap was present in 15 patients (68%) during dissection with conventional septoplasty. While only one patient (5%) had a tear in the flap in Endoscopic Septoplasty.   The majority (73%) of the cases of Endoscopic septoplasty did not require nasal packing due to limited dissection and minimal bleeding.  Those who required nasal packing, the majority of them underwent some other endoscopic procedure along with the septoplasty.  In all cases (100%) of patients undergoing conventional septoplasty, nasal splinting (which was kept in for five days) was required in the postoperative period.

In a study by Nayak, et al,6 the Endoscopic-aided septoplasty group was found to be more effective in correction of nasal symptoms such as nasal obstruction and headache.  In our study, more patients were relieved from these symptoms who underwent Endoscopic septoplasty as compared to the conventional septoplasty group.  Compared to conventional septoplasty, endoscopic correction of a septal spur under direct light visualization provides a better approach for other associated endoscopic procedures like FEES, endoscopic DCR, repair of CSF rhinorrhea, and endoscopic removal of an inverted papilloma.  Isolated septal spur with headache, nasal obstruction, atypical facial pain was corrected with limited tissue dissection with the endoscopic approach as compared to the conventional method in which a whole flap was elevated with more morbidity and complications.  Endoscopic septoplasty provides a significantly improved field of view particularly in the more posterior deviations.

Although packing had better postoperative hemostasis, edema/swelling, watering from eyes, headache and discomfort to patients were more in the conventional group (86%) as compared to the endoscopic group (27%).  All 6 patients (27%) who required nasal packing, the majority underwent some other endoscopic procedure.  Limited trauma to the opposing surface of the septal mucosa and lateral nasal wall had less chances of postoperative adhesion formation.  Healing of the incision site was better in the endoscopic group as compared to the conventional group.

The endoscopic approach to septoplasty provides several advantages over the standard headlight technique (Hawang, 1999)8.  It facilitates accurate identification of the pathology due to better illumination, improved accessibility to remote areas and magnification.  It allows better understanding of the lateral wall pathology associated with the septal deformity.  It allows limited incision and elevation of the flaps, not compromising adequate exposure of the pathological site.  It effectively removes the contact areas and, thus, relieves the contact headache, and allows intra-operative assessment of the pathological site.  Endoscopic septoplasty is associated with significant reduction in patient morbidity in both the pre-operative and postoperative period (with pack and after pack removal) due to the limited extent of flap dissection along with limited manipulation and resection of the septal framework.  It also avoids the use of the Killian nasal speculum which produces pressure that can cause postoperative discomfort.

Endoscopic septoplasty is useful in revision septoplasty, on patients who have persistent septal deviation. In this situation, the flaps are frequently adherent due to extensive prior dissection and cartilage resection. Thus, elevation in this area is difficult at best and may compromise flap viability.  However, the endoscope has its own limitations which include loss of binocular vision and the need for frequent cleaning of the tip of the endoscope especially when there is extensive bleeding.

ENT surgeries have always been notoriously known as selfish surgery because the assistant is not able to watch the surgical steps. Thus, Endoscopic septoplasty with the use of video monitors and recording can be a valuable teaching tool for residents.9