E Mail   This email address is being protected from spambots. You need JavaScript enabled to view it.

Forty cases of ameloblastoma are reported.  Over two-thirds had a tumor size of over 10 centimeters.  Because of the large size of the tumor and perforation of the cortical bone with spread into the soft tissues, 22 patients (55%) were treated with mandibular resection with reconstructive plating but without bone grafting.  This aids in the detection and treatment of possible recurrences.  Three patients broke their reconstructive plate during the postoperative period.  All three patients underwent successful revision with reconstructive plating and bone grafting.  The patients were followed between two to five years.  No recurrences were noted in the 35 patients who underwent mandibular resection.   However, four out of five patients that were treated with curettage developed a recurrence.

Ameloblastoma is a rare benign tumor accounting for 1% of mandibular and maxillary tumors and cysts.1  In its early stages it is confined to the bone but large tumors can break through the cortex and involve the soft tissues. The tumors are known for their propensity for local recurrence, especially if soft tissue invasion or cortical bone perforation has occurred.

Inadequately treated and longstanding tumors can rarely undergo malignant transformation which is defined as tumors having metastasized or “cytological features of malignancy” in the primary tumor.4  The term “malignant ameloblastoma” is preferred for those tumors that have a benign appearance but have metastasized and the term “ameloblastic carcinoma” for tumors with a malignant histological appearance regardless of mestastasis.5  As of 2007, only 35 cases of ameloblastic carcinoma have been reported in the English literature.5  Recurrence of disease may be delayed with reports of recurrences 21 and 28 years after resection.6,7

Treatment results, histopathological findings and recurrence rates are calculated and reported for the studied patients.

The results and analysis showed that the incidence of ameloblastoma has a male-to-female ratio of approximately 3 to 1.  The mean age was 38.3 years.  The most common age group was between 18-40 years of age, least common was below 18 years of age.

Ameloblastomas, predominantly are found in the mandible (95%) and in the maxilla (5%).  The most common site was the posterior mandible in 32 patients (the anterior mandible was involved in 6 patients).  In two patients the lesion crossed the midline.

Only two patients had maxillary lesions, one in a posterior location and one anterior.   The pictures below are from a young girl with a maxillary ameloblastoma. 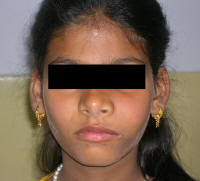 Pre-operative Orthopantomogram showing an ameloblastoma in the left maxillary bone. 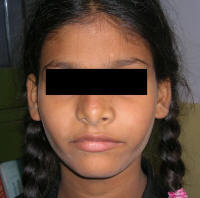 The size of the tumors was greater than 10 cm in 67.5% of patients. Only three patients had a tumor size less than 5 cm. Below is a picture of a patient with a large ameloblastoma. 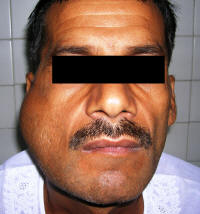 During surgery the mandible was resected and a reconstructive plate placed.  A bone graft was not inserted because of soft tissue invasion. 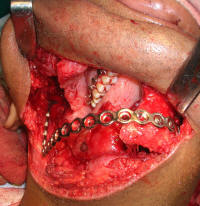 Picture of the surgical specimen 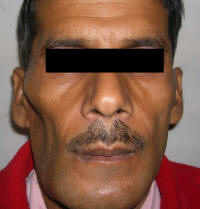 Soft tissue infiltration was present in 87.5% of the cases.  The radiographic appearance was multilocular in 80%of the cases whereas 20% of the cases were unilocular.  Cortical plates were torn in 80%, and in 82% basal bone was also expanded.  In only one patient was there no expansion of the cortical plate.

Histopathological reports indicated that the most common variant was follicular ameloblastoma (37.5%) and cystic ameloblastoma  (25%).

Similar to the findings of Fregnari, et.al.3 80% of our tumors were located in the posterior mandible and the majority of patients were in the fourth decade between the ages of 18 to 40.  Average age of presentation that has been reported in the literature is between 30 and 33 years.2,3  In our patients, the mean age of presentation was 38.3 years.

The majority of our patients presented with very large tumors, with 67.5% of patients having a tumor size of greater than 10 cm (see Table 1).  Radiology studies found cortical bone torn in 80% of the patients and pathological studies demonstrated soft tissue infiltration in 87% of patients. Follicular histopathology was found in 37.5% of our patients.

Large size, cortical rupture, soft tissue invasion and follicular histology are all predictors of recurrence.3  The total recurrence rate for most studies has been between 13.3% and 22%.2,3  Because of this, a large number of patients (55%) were treated with resection and plating without reconstruction.  This will allow easier detection and management of future recurrences. Three patients treated with this technique developed a complication with the fracturing of the reconstruction plate during the follow up period.  All three patients underwent successful revision with bone graft and reconstructive plating.

Curettage was used in the minority of the patients with small tumors and was associated with the highest (80%) recurrence rate.  These findings are similar to Lau8 who reported a 30.5% recurrence rate with enucleation as compared to 3.5% with segmental resection.  Reduced recurrences were noted in patients undergoing enucleations who were also treated with the application of Carnoy’s solution (a fixative composed of ethanol, chloroform and acetic acid).

Despite the large tumors in our patient population, recurrences were not observed in patients undergoing mandibular resection.  As opposed to curettage, resection allows for a greater margin of clinically uninvolved tissue around the tumor.  All of our patients require long term follow-up since recurrences have rarely been reported 20 to 30 years after resection.6,7  This finding has been observed by other authors and has lead to Chana9 and Disa10 recommending the treatment of resection with a free fibular flap reconstruction.  Chana also reported good results with and recommends simultaneous placement of osseointegrated implants during the primary procedure.9

The authors have evaluated, clinical, radiographic and histopathological findings of 40 cases of ameoblastoma from a single Institute treated by one team during 2003-2010.  The results show that tumors were predominantly solid and affected the  posterior mandible.  The data showed that the cases treated by segmental resection developed no recurrences, but cases treated by curettage had a significant number of recurrences.  The presence of ruptured basal cortical bone, and histological pattern seems to be an important factor for the management of ameloblastoma. 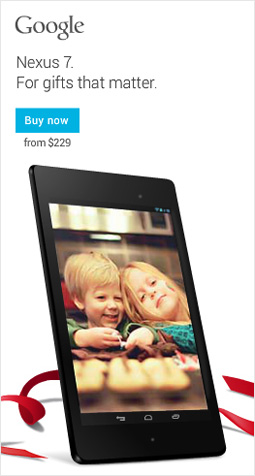