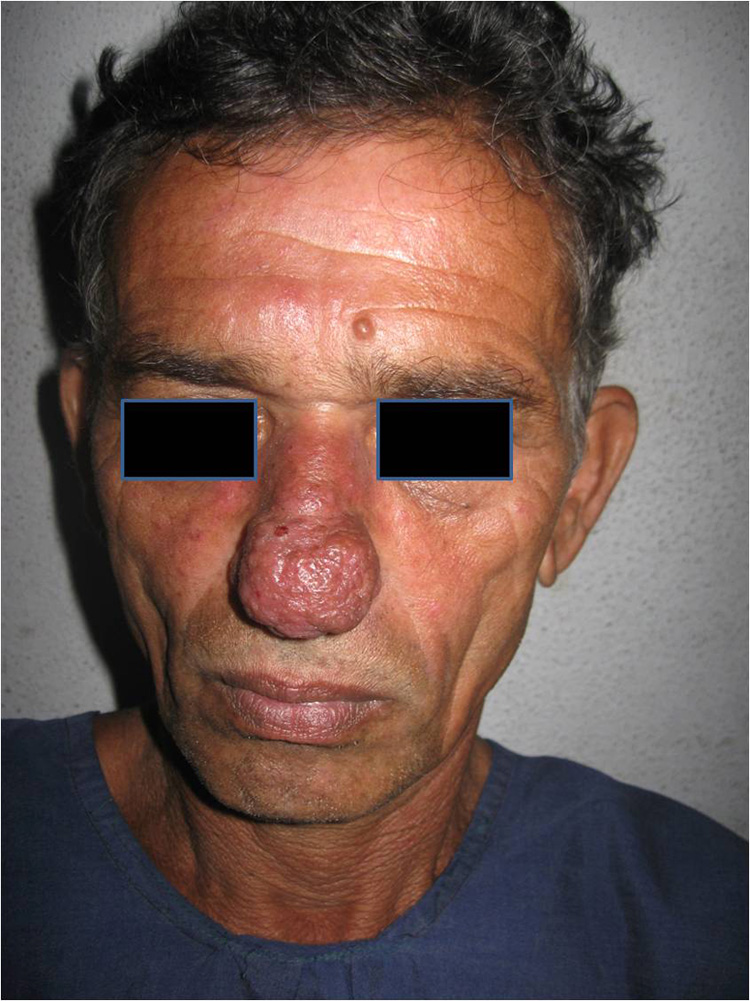 Email: This email address is being protected from spambots. You need JavaScript enabled to view it.

Rhinophyma is a disfiguring soft tissue hypertrophy of the nose predominantly seen in older white men.  It is closely related and believed to be the final stage of acne rosacea.  A major complaint in these patients is the cosmetic disfigurement.  Rarely may it cause nasal obstruction and visual disturbance.  Treatment is mainly surgical with many modalities providing almost similar cosmetic results.  We are presenting five cases of Rhinophyma treated by diode laser and application of a split skin graft.  All five patients were males who worked outdoors and presented with disfigurement of the nose due to the growth.  Excision of the rhinophyma was done using diode laser and the raw area was covered with a split skin graft.  All patients had good cosmetic result.

Rhinophyma is a benign disfiguring condition due to hyperplasia of sebaceous and fibrous tissue of the nose.  It is considered to be the end stage of progression of acne rosacea.  It is seen more commonly in older males though its predecessor, acne rosacea, is seen in young females.  The most common site is the tip of the nose, but it is also seen in other sites like the  glabella, malar region and chin.  The main reason for seeking medical help is the cosmetic deformity caused by its presence.  A large Rhinophyma may cause nasal obstruction and sometimes obstruction to vision.  Treatment of Rhinophyma is mainly surgical, by sharp dissection, electrodessication or laser.  Dermabrasion may be useful in final contouring of the nose.  This is a study of five cases of Rhinophyma treated with diode laser followed by split thickness skin grafting.

This study was conducted in the Department of E.N.T. of K.S.Hegde Medical Academy, Mangalore, Karnataka between January 2007 and May 2010.  Patients presented with complaints of swelling over the external nose and were screened for the presence of rhinophyma.  A thorough history was taken regarding the onset, duration and progression of the disease and for any significant past medical history, such as diabetes.  The occupation of the patient was noted.  History of consumption of alcohol was noted.  A thorough general and E.N.T. examination was performed and the diagnosis of rhinophyma was made clinically.  Endoscopic examination of the nasal cavity was done to rule out a co-existent nasal pathology.  Patients were counseled regarding other treatment options such as excision with a cold knife, electrocautery and laser.  All patients opted for laser excision and skin grafting.

Dissection of the tumor was done under general anesthesia using a diode laser in a continuous mode at 8 watts of power.  Resected tissue was sent for histopathological examination to rule out the presence of a malignancy.  The raw area was covered with a split- thickness skin graft taken from the thigh.  A dressing was applied using sofra tulle.  Oral antibiotics and analgesics were given in the post-operative period.  The dressing was changed after 48 hours.  Patients were discharged after three days and were followed weekly for 1 month and then monthly for six months.  Histopathology of the specimens was confirmatory for rhinophyma.     -  Click on Pictures to Enlarge - 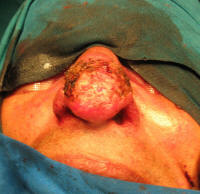 The above picture shows the immediate after excision and before grafting appearance.

The above picture shows the immediate postoperative appearance after grafting.

The chief complaint in all the patients was a nasal causmetic deformity due to swelling.  The swelling was initially flat which later increased in size to form an elevated mass with an irregular surface.  Two of the patients had complaints of disturbance of vision because of the tumor.  None of them had nasal obstruction.  There was no history of swelling in other body parts.  Four of them had a history of alcohol intake whereas one was a non-alcoholic.

In all of the patients, the tumor was limited to the tip of the nose.  Nasal airway was adequate.  Ophthalmologic evaluation was done in patients complaining of vision disturbance.  Vision was normal in all these patients.  All patients underwent excision of the lesion with diode laser and the raw area was covered with a split-thickness skin graft taken from the thigh.  After the procedure, a sofra tulle dressing was placed.  All patients tolerated the procedure well.  Bleeding was minimal and was easily controlled with pressure.  Postoperative pain was not severe and was relieved with NSAIDs. Prophylactic oral antibiotics were given to all patients.  There were no perioperative complications in all the five cases. 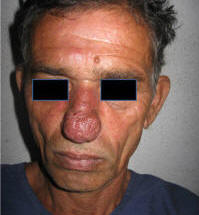 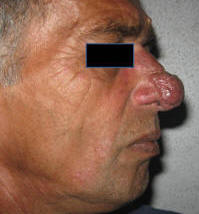 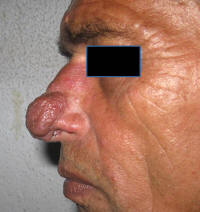 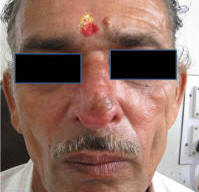 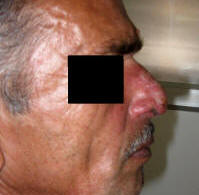 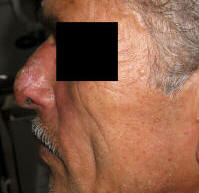 Rhinophyma was first recognized in ancient Greece and Arabia.  In 1845, Von Hebra coined the word Rhinophyma.1  He derived this word from the Greek word “rhis” meaning nose and “phyma” meaning growth.  In 1846, Virchow associated Rhinophyma with acne rosacea.2

Acne rosacea is characterized by telangiectasias, erythema, thickened skin, tuberous nodules, and lobules.  Histologically, there is sebaceous gland hyperplasia, fibrosis, and hypervascularity.  Rebora3 described four stages of acne rosacea: the pre-rosacea stage with frequent facial flushing; the vascular rosacea stage with thickened skin, telangiectasias, and erythema; the inflammatory stage where there is erythematous papules and pustules; and the fourth stage is described as rhinophyma.
Rhinophyma is usually limited to the lower third of the nose, but occasionally the chin and forehead can also be involved.4  Similar condition can be seen in the ear pinna which is called otophyma.

The prevalence of acne rosacea is about 0.5% to 10%.  The male-to-female ratio reported is about 5:1 to 30:1 by Wiemer.2 Although acne rosacea is seen predominantly in females, with a male: female ratio of 1:3, rhinophyma is seen mainly in men.  The increased incidence in men is assumed to be due to androgenic influence.  It is mainly seen in Caucasian men4
The exact etiology of rhinophyma is not known.  It is thought to be due to numerous factors like alcohol, Demodex folliculorum (facial mite), and H. pylori.

Sunlight is believed to be a major triggering factor for rosacea.  In our study, all five patients had a history of working in sunlight for long durations.  Foods which cause facial flushing such as alcohol, spicy food, coffee and tea may aggravate rosacea and make it more prominent.  There are conflicting reports about the association between rhinophyma and alcohol abuse.  But there is no statistical evidence to support the role of alcohol as an etiology for rhinophyma, as reported by Curier, et. al. 5

The main complaint in patients with rhinophyma is facial disfigurement.  The bony and cartilaginous framework is not affected in most cases.  Some patients complain of nasal obstruction, if the swelling is large.  Sometimes vision may be disturbed as the mass comes into the field of vision, when the mass is large.  All of our patients had a complaint of facial disfigurement; two had disturbed vision, which was revealed after surgery.

The treatment of Rhinophyma is mainly surgical.  The nonsurgical treatment such as retinoids and topical antibiotics is limited to rosacea.  There are a wide range of surgical treatments available now such as scalpel and razor blade excision, cryosurgery, electrosurgery, resection with heated knives and loops, dermabrasion, CO2 laser and Argon laser.4   Kaushik, et. al, described a technique of rhinophyma treatment by microdebrider and Floseal.6

The choice of surgical methods should be based on the extent of the disease, expense, availability, operating time, and user experience.

Surgical treatment of rhinophyma dates back to 1845 when it was treated by excision with primary or secondary closure. Skin grafting was added to this in 1912.7  Fisher demonstrated that skin grafting had no additional advantage.8
Eisen, in 1986, reported the use of a Shaw knife for rhinophyma.  This scalpel heats from 110 to 270 degrees.  It provides a narrower zone of tissue destruction than electrocautery.9   Vural, et. al, in 2010 reviewed seven patients who underwent treatment of rhinophyma with a shaw knife and reported excellent outcomes and essentially no perioperative complications.10
Greenbaun compared the results of electrosurgery and CO2 laser in rhinophyma surgery and concluded that both gave equivalent cosmetic result.  He also stated that the use of CO2 laser is more time consuming and 15 to 20 times more expensive than electrosurgery.11

El-Azhary used the CO2 laser in minor and moderate cases.12  Madan V., et. al, reported a review of 124 patients who underwent treatment with Carbon dioxide laser for rhinophyma and concluded it to be an effective and durable treatment for rhinophyma.13

Wenig, in 1983, used  an Argon laser for rhinophyma and advocated its use for hemostasis and for telangiectasias.14
The YAG laser was first reported used in rhinophyma by Wenig in 1993.  He advocates the use of this technique, and used it in six patients and found equally good cosmetic results with a shorter healing time compared to the CO2 laser.  This is thought to be due to the smaller thermal damage zone compared to the CO2.

The use of the diode laser is reported by Apikian, et. al, in 2007.  They reported 5 cases of mild to moderate rhinophyma who were treated with diode laser.7

In our study, we have used a diode laser in continuous mode for excision of the lesion.  The advantage of using a diode laser is a bloodless field.  The raw area was covered with a split-thickness skin graft from the thighs.  The use of a skin graft helped in speedy healing without development of granulations which were seen when the area was kept raw.

Rhinophyma is a benign condition of the external nose affecting males.  Cosmetic disfigurement is the predominant complaint in patients with rhinophyma.  Surgery is the main treatment option.  A diode laser facilitates precise excision because of the bloodless field.  Covering the raw area with a spit skin graft helps in early healing and a better cosmetic result.